Carbon fibre has established itself as a wonder material in vehicle construction, with its mix of low weight and high strength being prized for many of the world’s most advanced vehicles of land, sea and air. Austrian company Fipofix believes that it’s identified a material better-suited to the high seas, saying that its specially processed volcanic fibre-based composite, more commonly known as basalt fibre, offers a better performance-price ratio than carbon fibre or fibreglass and can be recycled after use. The company is in the process of testing the material in some of the world’s most extreme marine conditions. 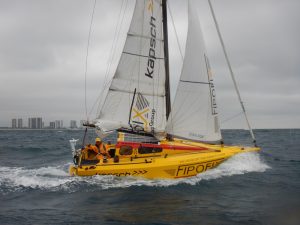 Though basalt fibre isn’t a household term like fibreglass or carbon fibre, it’s not a new composite, either. According to a 2006 article published on CompositesWorld.com, basalt fibre was originally patented in the US in 1923. Fipofix’s claimed innovation isn’t so much in the material, then, but in the processing and application of that material. The company began as a 2009 collaboration between Austrian technology group Kapsch and Yacht Construction Consulting. The parties innovated a new way of processing brittle, touchy volcanic fibres into rugged, unidirectional fabric purpose-built for nautical use. They called the processing system “Fiber Positioning Fixation” (or Fipofix), submitted a patent application in 2011, then formed Fipofix GmbH.

“Positioning fibres without damaging them represents the greatest challenge in the manufacturing of composite materials,” Kapsch explained in 2013. “Up to 40 percent of the filaments of a roving are damaged in previous processing methods, such as weaving, stapling and sewing, which results in decreased performance of the product under compressive and tensile loads. Fipofix bonds the positioned fibers to the respective matrix for the final processing of the fabric without using foreign materials for fixation, such as yarns, clamps or other adhesives that additionally weaken the part.”

Fipofix believes the resulting basalt fiber composite is optimally suited for nautical applications, stating that it is hydrophobic, UV- and heat-resistant, fireproof, and acid-proof, while creating a hard surface that can absorb vibration and shock. It’s also a more eco-friendly solution, being sourced from a sustainable, natural material and being 100 percent recyclable, setting it apart from carbon fibre and fibreglass, which offer limited recycling potential. Another claim is that it offers a superior cost-benefit ratio compared to both fibreglass and notoriously high-priced carbon fibre.

All those properties look great on paper, but they’re only valuable insomuch as Fipofix’s UD basalt fibre composite actually performs. With help from Yacht Construction Consulting, Fipofix built the “Proof of Principle” Open 16 sailing yacht to test the material out on the choppy high seas. The 16-ft (5.6-m) vessel’s hull and deck were built from a sandwich construction with an inner and outer layer of Fipofix UD volcanic composite laminated to a balsa wood core. The keel fin was also crafted from Fipofix UD, while the mast and rigging used carbon, stainless steel and other materials. Augmenting the sail power was a small, 5-hp motor powered by a 55 Ah battery hooked up to a flexible solar panel mounted on the cabin roof.

The Open 16 was baptized by fire, its first test being a 133-day voyage across the North Atlantic Ocean from Europe to North America and back, a total of 10,000 nautical miles (18,500 km). While the journey could have been disastrous if Fipofix UD didn’t perform to expectations, it was instead highly successful. Not only did the yacht complete the journey through some harsh, trying storm conditions (it took place between November 2013 and July 2014), but under the captainship of Harald Sedlacek it set three claimed world records in the process. The company says that when the yacht landed in Les Sables d’Olonne, France to complete its voyage, its Fipofix structural elements and components were all in prime working condition, with no significant damage to be found.

Fipofix hopes to supply other nautical and industrial customers with its basalt fibre composite. It says that the material can be adjusted in weight, breadth and length to meet individual customer needs, without high retooling costs. Beyond shipbuilding, Fipofix believes its material could find use in a variety of sporting equipment, including surfboards, waterskis and snowboards.