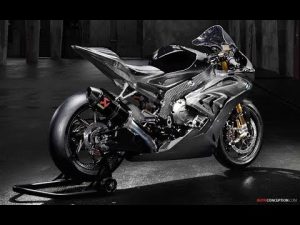 At this year’s Milan Motorcycle Show, BMW Motorrad unveiled an “advanced prototype” of its BMW HP4 RACE, which the company is calling its most exclusive motorcycle ever. Like many BMW vehicles, it features a significant amount of carbon fibre. The 2017 HP4 RACE is the latest version of the HP4 that debuted in 2013 with one of the first semi-active suspension systems on the market.

The HP4 Race will join Ducati’s Superleggera as the only bikes on the market with full featherweight carbon fibre frames. For the HP4 RACE, the use of composites will extend beyond just the frame.

“The HP4 RACE will feature the full carbon fibre main frame and carbon fibre rims,” said Stephan Schaller, President of BMW Motorrad. “We will reveal more about this model next spring.” 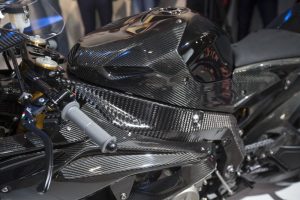 According to sportrider.com, the carbon fibre main frame, self-supporting tail section, and wheels, as well as the bodywork, were likely made in-house by BMW at one of its three manufacturing plants in Landshut, Leipzig, and Dingolfing, Germany. The site adds that BMW was one of the first auto manufacturers to make a significant investment into its own carbon fibre manufacturing capabilities, instead of outsourcing the manufacturing components like most other automakers.

The motorcycle will be manufactured by hand in an exclusive limited series and supplied in the second half of 2017.

Buy carbon fibre, fiberglass and other composites online in Australia at Beyond Materials™

Swedish startup company Uniti recently released its “smartphone car,” a modern electric vehicle that comes with five years of free electricity. The car can cover 186 miles with its 22 kWh battery and charge up to a range of 124 miles in 30 minutes. 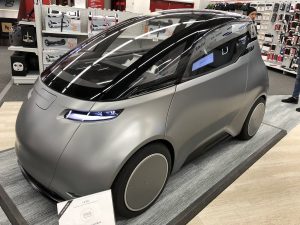 According to Lewis Horne, founder and CEO of Uniti, the car’s body is made entirely of Zoltek’s PX35 carbon fiber in order to facilitate the company’s ability to scale up production. Zoltek, a subsidiary of Toray, has the largest global capacity of industrial-grade carbon fiber which can support automotive mass production. Additionally, by utilizing PX35, Uniti was able to create an electric car that is lightweight without sacrificing safety or comfort.

“Uniti is pioneering a new space in the electric vehicle market,” said David Purcell, Executive Vice President of Composite Intermediates and Oxidized Fiber at Zoltek. “We are pleased to support the efforts of this innovative team, and even more pleased that Uniti recognizes Zoltek’s PX35 as a key enabling material on their initial vehicle.” 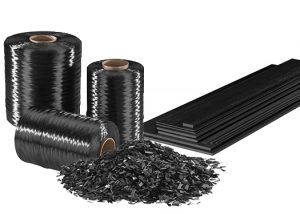 According to Zoltek, PX35 carbon fiber has superior mechanical properties that are comparable to steel with just 25 percent of the density of steel at a price point competitive with aluminum. In addition to the automotive market, Zoltek is also currently supplying PX35 carbon fiber into wind energy applications.

Uniti will offer a line of two, four and five-seat vehicle models, with first deliveries targeted for 2019. There are already over 1,000 advance orders for the start-up company’s first vehicle. For more information, visit www.uniti.earth.

Buy carbon fiber, fiberglass and other composites online in Australia at Beyond Materials 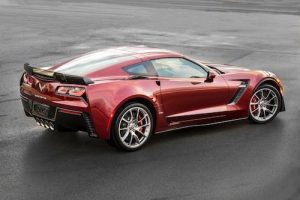 PolyOne announced its lightweight, carbon fibre-reinforced polymer (CFRP) underbody brace is now offered as a performance upgrade for the current C7 generation of GM’s Chevrolet Corvette Z06. The Corvette Z06 won last year’s Car and Driver Lightning Lap with the fastest speed, which also ranked as the second fastest lap time in the history of the event. 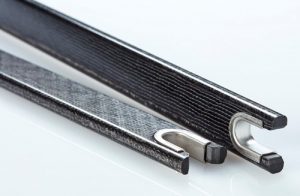 “Our Glasforms team evaluated several composite types and identified a solution with optimal performance. The carbon fibre-reinforced composite part is 17% lighter than the stock aluminum part, and the composite held up well in GM’s extensive vibration, shake and road test regimen,” said Matthew Borowiec, general manager, PolyOne Advanced Composites – the company’s new platform it created after it acquired Gordon Composites and Polystrand. “We are proud that our team’s expertise in materials and engineering is helping to boost the legendary performance of the Corvette.”

General Motors uses the Corvette as a validation vehicle for many of its new technologies. GM has a 60-year history with composites. In 1953, Molded Fibre Glass launched the first production model of the Corvette with fibreglass body panels. In 1972, the Corvette’s body panels were made with sheet molding compounds (SMC) for the first time. All Corvettes since 1973 have used SMC body panels. As recently as last year, Continental Structural Plastics introduced its TCA Ultra Lite body panel for the Corvette.

SpaceX has completed a critical test for the carbon fibre fuel tank of its Interplanetary Transport System spaceship, which is designed to transport humans to Mars. Last month, during an “Ask Me Anything” session on Reddit, SpaceX CEO Elon Musk said he believes the carbon fibre tank is the most essential part of the spaceship. 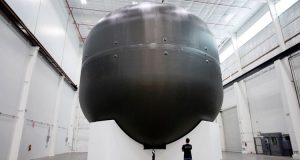 The tank is 12 meters (~39 feet) wide, the largest such vessel ever produced. According to Space.com, SpaceX tested the tank by taking it out to sea to see how it performs under pressure. SpaceX wrote on Twitter that the tank reached both of its pressure targets and that the next step will be full cryogenic testing.

In the Reddit discussion, Musk revealed the tank would be “built with [the] latest and greatest carbon fibre prepreg” – carbon fibre that’s pre-impregnated with a resin to make it tougher. “In theory, it should hold cryogenic propellant without leaking and without a sealing linker,” he said. Carbon fiber’s high tensile strength, design flexibility and low density are also major benefits.

Musk was also quick to note, though, that working with carbon fibre wouldn’t come without its challenges. 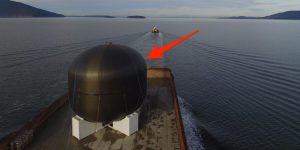 “Even though carbon fibre has [an] incredible strength-to-weight [ratio], when you want one of them put super-cold liquid oxygen and liquid methane — particularly liquid oxygen — in the tank, it’s subject to cracking and leaking and it’s a very difficult thing to make,” Musk explains. He adds that the sheer scale of it is also challenging.

However, despite potential obstacles, he did note that “early tests are promising” and that “initial tests with the cryogenic propellant … actually look quite positive.”

“We have not seen any leaks or major issues,” he added.

Baltic Yachts’ all-carbon composite, 160-ton single-mast yacht the Pink Gin VI is one pace to debut in the water by May 12. 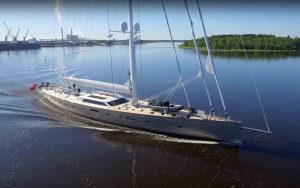 The yacht’s hull was laminated with epoxy carbon prepreg for its inner skin and E-glass and aramid for its outer skin. A layer of Kevlar woven fibers was used in the forefoot of the hull laminate for added impact resistance. The deck was also laminated in epoxy carbon prepreg with a core-cell foam as sandwich material.

The interior of the boat features structural bulkheads made of Nomex/Core-Cell core CRP sandwich construction. It also features a 67.9m carbon fibre mast. By using composites, the boat’s overall displacement is only 235 tons, Baltic Yachts says is low for a yacht of this size. 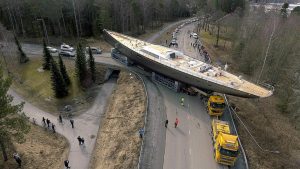 The Pink Gin VI is the world’s largest all-carbon-fibre sloop, so transporting it to its destination at Jakobstad, Finland was a challenge. Instead of traveling by sea, the sloop had to be driven 13 miles on land. The yacht traveled at an average speed of about 6 mph during the journey during which roundabouts, a railroad crossing and other obstacles had to be negotiated. Baltic Yachts was given permission to widen roads in places and temporarily remove traffic signs so that the unusual load could travel safely to Jakobstad. The carbon fibre mast and the keel will be delivered separately, and will ultimately arrive at its new owner by the middle of summer.

In addition to the Pink Gin VI, Baltic Yachts is also planning on beginning construction of three other carbon fibre yachts this year, each of which has already sold out. 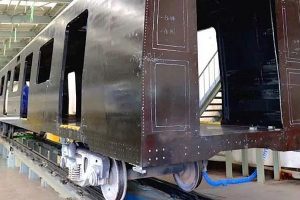 CRRC Changchun Railway Vehicles, a leading Chinese train car maker, announced that it has developed a prototype of the world’s first subway train made of carbon fibre. CRRC says its composite prototype is more durable and requires less energy than traditional metal cars. It is also believed to be 35 percent lighter due to its use of carbon fibre.

In recent years, CRRC has sold train and subway cars to 20 countries including the U.S., Brazil and Australia. The subway cars are expected to last at least 30 years as carbon fibre is more capable of resisting fatigue, corrosion, and UV radiation, CRRC says. Carbon fibre is also stronger and quieter compared to metal, the manufacturer notes, and offers in better thermal and sound insulation performance.

CRRC Changchun said it owns full intellectual property rights on the use of carbon fibre for making subway cars. The cars will first be used for the Massachusetts Bay Transportation Authority (MBTA) Orange Line. Back in October, CRRC produced the first China-made subway cars for the Orange Line as part of a 284-carriage order signed by the company with MBTA in December 2014. The deal was the first time a Chinese train car maker won a bid in the US market. The company believes the strides it has made with in-house research will result in mass production of the cars.

Here at Beyond Materials we have put together Carbon Fibre and DIY kits that you can use to make your first carbon fibre parts.

These carbon fibre kits include all of the basic materials you will need to make a small carbon fibre part, make a repair or laminate an existing object. The best part is that our carbon fibre kits are small and affordable and include everything you need to get started. 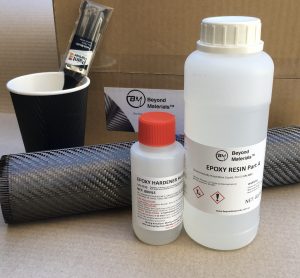 For general yachting, we offer a fibreglass repair kit that will help you repair or at least temporary mend a crack or a hole in a punctured hull – and without being any kind of composite expert or having to carry or buy large quantities. Beyond Materials makes composite repairs simple and straightforward.